Keep up to date with our recent news, events and meetings

Condover, is situated 5 miles south of Shrewsbury, but only 7 miles from Church Stretton and the Shropshire hills. Much of the village centre is a conservation area. Surrounded by fields and bordered on its southern side by the Cound brook, Condover retains a rural feel. Much of the adjoining countryside is accessible by a network of footpaths. Local agriculture these days is a mixture of arable and livestock. A more recent addition is a solar energy farm, alongside a livery stable, on the site of an old WW2 airfield. The village has a village hall, post office, butcher’s shop and the following:

Keep up to date with our news
Read more

On the outskirts of Condover village there is also an impressive Elizabethan hall, Condover Hall. This is an elegant Grade I listed three-story sandstone building, described as possibly the ‘grandest manor house in Shropshire’. Condover Hall was a royal manor in Anglo_Saxon times and until the 16th century Condover Manor was in and out of Crown Tenure. In 1586 it was purchased by Thomas Owen, a Member of Parliament for and Recorder of Shrewsbury, from the family of the previous owner, Henry Vynar. Henry Vynar was a London merchant who had died in 1585. Many specimen trees in the surrounding woodlands date back to times when Condover Hall was a family home. Remains of the old walled gardens can still be seen. The grounds are not however open to the public.

From 1946 to 2009, Condover Hall had been run as a residential school, initially for blind children when owned by the land latterly under private ownership as a school for autistic children, covering boy boarders and coeducational day pupils. It is now occupied by private company offering outdoor learning and adventure holidays for young people.

FAMOUS PEOPLE OF THE PAST

‘On your tomb, instead of flowers, the gratitude of the Serbs shall blossom there. For your wonderful acts your name shall be known from generation to generation’

Born 3rd May 1855 into a military family. Both parents died before she was 10 and she was sent to boarding school before travelling to India to live with her sister. She met and married Col. George Harley. They had three children before returning to England and setting up home in Condover. Her husband died in 1907 and she subsequently became a leading member in the West Midlands Suffrage movement and the Church League for Women’s Suffrage. 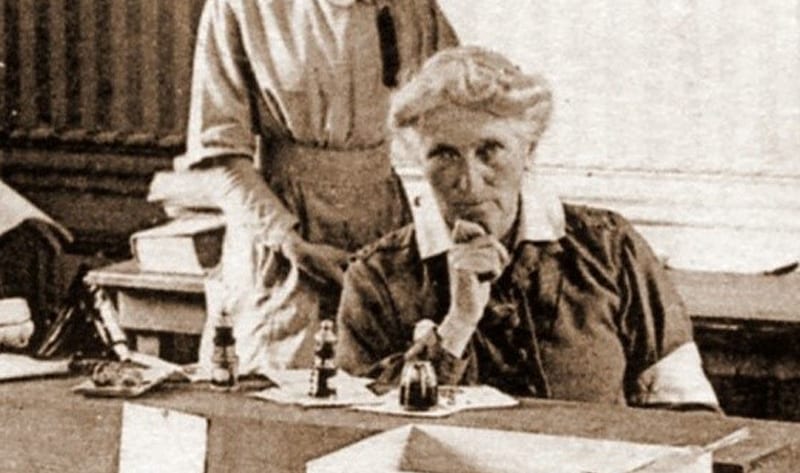 Within 7 days from the outbreak of WW1, the League became a body to encourage women to take over mens’ jobs, releasing them to join the armed forces. Katherine then became involved with the Scottish Womens Hospitals, which formed units able to set up field hospitals close to the front line. The first unit was posted to Royanmount in France, which Katherine soon found herself running. She was subsequently posted to Chaneloup and in 1915 to Ghevgeli in Greece.

Conditions were harsh and the hospital was forced to relocate to Salonika. For her dedication and service to France, Katherine was awarded the Croix de Guerre.

In spring 1916, Katherine returned to England but was persuaded by the Serbian government to return and set up 2 more hospital units. A fleet of ambulances, driven by women, transported the wounded from the front line. The women frequently disobeyed orders and extracted casualties from close proximity to the fighting. Following an inspection in November 1916, Katherine and her daughter were forced to resign. They moved to Monastir to help the local population deal with the ravages of war. Although occupied by Allied forces, Monastir was subject to daily shelling by the surrounding Germans. On March 7th 1917, Katherine was visiting a friend when a shell exploded outside the house and she was killed by a flying shard of glass. Katherine was buried with full military honours and her grave marked with a large stone cross and inscription.

In addition to the WW1 Honours plaque in Condover church, there is a small plaque on the site of the old Salop Infirmary (Shrewsbury) in memory of Katherine Harley.